Hurricane Harvey caused widespread destruction across the South Central region of the U.S. and while cleanup efforts have started, supply chain havoc continues. Similar to how the cities across eastern Texas and Western Louisiana cannot be rebuilt in one day, the supply chain could take considerable weeks, if not months, to recover from Harvey.

Here is an analysis of the impact to the supply chain: 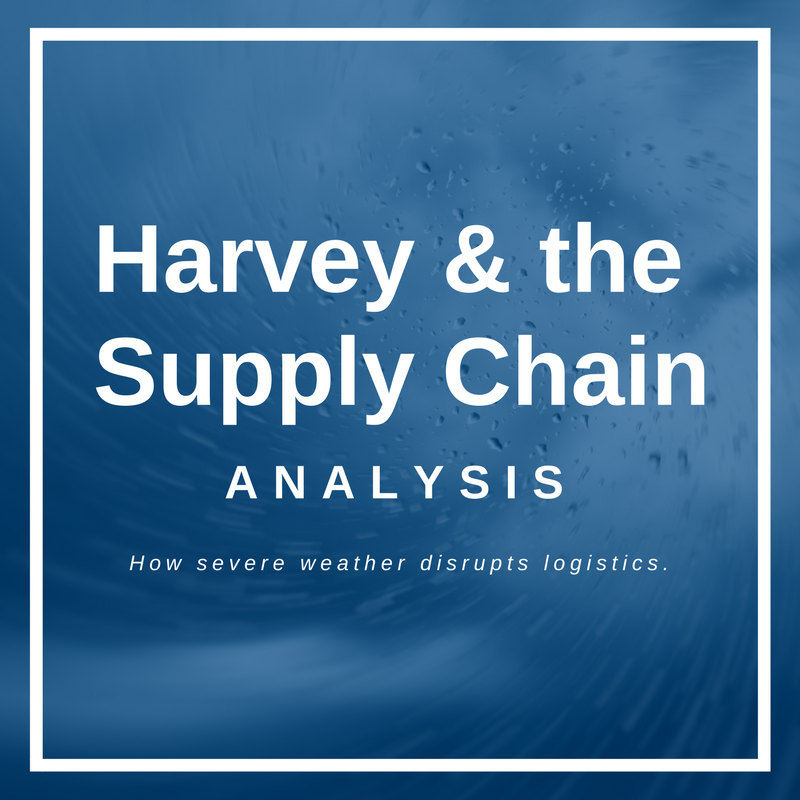 Before Harvey made landfall and caused widespread destruction, the TL spot rate market had steadily been gaining momentum. Multiple spot market index providers have been reporting the tightening of capacity with substantial year-over-year increases for a number of months. There is also a substantial imbalance in freight destined for Texas versus freight originating in Texas.

With relief efforts underway, the amount of available trucks to transport freight other than aid supplies has decreased. Trucks are expected to continue to be used for humanitarian support with the potential to decrease the available capacity for LTL and TL shipments. Additionally, trucks in the region could have been damaged due to flooding and, therefore, unavailable for use.

The national unemployment rate has hit a record low over the past year. Major industry sectors are reporting job growth, resulting in a smaller labor pool for trucking to recruit from. Additionally, due to the Harvey repair, construction worker hourly rates are expected to increase, with the potential to attract drivers to leave the trucking industry for better pay. The trucking industry has also been battling on-going driver shortages coupled with an aging driver population.

The Houston area is a major hub for oil wells and refineries and some estimate that the prolonged shut down of facilities could remove up to 20 percent of the total fuel supply from the market. This could enable suppliers to charge more and carriers to pass along Fuel Surcharge (FSC) increases to shippers. The FSC rate jumped a staggering $0.16 in just one week following Harvey and further increases could occur. Additionally, as some routes could be altered and consequently extended to bypass flooded roads, more fuel could be used on an average trip.

The Port of Houston is the only deep-water port in the Gulf of Mexico and was ranked the 9th busiest import gateway and 8th busiest export hub in North America during 2016. If ocean carriers had to skip the Port of Houston call and discharge containers at another port, congestion and an imbalance in empty containers could occur. With Harvey hitting amid the busiest import shipping months of the year, holiday inventory has the potential to be impacted. Those holiday imports would still need to then be trucked to the final destination, with the possibility of further limiting the available trucks, drivers and using more fuels due to a longer route.

With widespread destruction to infrastructure in the Houston area, retailers could not only have to clean up and remodel stores but also replace ruined merchandise. This could result in a larger push to replenish inventory in time for the holidays further impacting the supply chain.

While this analysis provides insight into the present challenges, similar to Katrina, the ripple effects on the entire supply chain could persist for months.

Our team’s thoughts are with all that have been impacted by Harvey and wish safety to those in the path of Irma.

Navigating the Driver Shortage Crisis in 2021